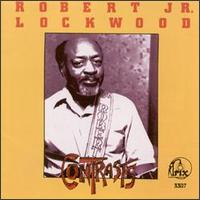 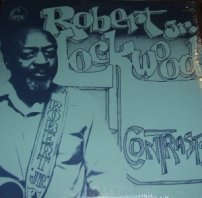 One of the happiest events in recent blues history is the emergence of Robert Jr. Lockwood from semi-retirement. He returns not as a man whose marvelous talent has seen better days, but as a splendid musician of undiminished skill and vivacity. Robert Lockwood is much more than the heir-apparent to the masterful Delta blues man, Robert Johnson; his talent is an ever-budding, growing one. He has always been flexible enough to move with the times, while tenacious enough to retain the immortal material he acquired while rambling through Arkansas and Mississippi. He is a personable man, justifiably prideful and quick to speak his mind, and he enjoys the respect and gratitude of many a big-name musician. It is therefore only fitting and proper that his illustrious career be capped by a prolonged encore and a new recording.

Lockwood was born in 1916 on a farm near Marvell, Ark., but he spent the better part at his first thirty years alternately in Helena, or St. Louis, Mo. Brief stints in and around Chicago, and travels through Mississippi rounded out the background of his pre-war career. The most notable association of his youth was his unique relationship with the legendary Robert Johnson. Having fallen in love with young Lockwood’s mother, Johnson befriended the boy and generously coached him on the guitar. The apt pupil caught on quickly, and was a mature musician in his own right by the time of his step-father’s untimely death, less than a decade later. He has been developing, refining, and adapting his art ever since.

In 1960, fate carried Lockwood to the relatively quiet musical climate of Cleveland, Ohio. It is therefore not surprising that he sought other means to support his wife Annie, and their children. Fortunately, with the increasing age of the kids, he has chosen to return full time to his natural calling, that of a blues artist, much to the delight of blues fans world-wide. Those whose acquaintance with him is limited to his years as an impeccable sideman in Chicago are in for a surprise, as are those only acquainted with his pre-war sides, for this album presents many facets of the talent of Robert. He appears here with his own working band, and proves with his strong, mellow voice that he has a vocal prowess to match that of his guitar. There are, also, solo cuts (something he has avoided as “uncommercial” for some time), and in all cases he sings soulfully, without affectation, and his lyrics consistently form a coherent whole.

The selection of material on this record is felicitous by virtue of its variety, as well as its quality – he is an awfully good song-writer. It stretches from the first song he learned to play, to recently composed stuff that includes a bop-flavored instrumental! It offers the sound of rural Mississippi in the thirties along with the tasteful urban styles of today, with pleasing gradations between – a veritable history of blues guitar. Lockwood uses two different guitars – on one piece he reverts to the Johnson-esque slide technique he uses sparingly. On half the album he is backed ably by Maurice Reedus (sax), Gene Schwartz (bs-gtr), and George Cook (dms), while the other half has only Gene backing him.

Culling highlights here is no small task, but the following numbers definitely demand mention. “Little Boy Blue”, a re-make of one of his 1940 numbers is rendered in “Spanish” tuning with a slide, and is delivered with remarkable vigor and finesse for one who thinks it “old fashioned”! It is a singular transmogrification of the old nursery rhyme into a vibrant, seductive blues masterpiece. Ironically, Lockwood recorded Robert Johnson’s “Dust My Broom” for J.O.B. well before Elmore James made his name with the song, but due to a colossal blunder it was never released. Perhaps justice will be done here, and it will now be associated with Lockwood . . . maybe even a hit? “Driving Wheel” is a pleasing rendition on acoustic guitar of the Roosevelt Sykes blue-chip blues standard, later popularized by Little Junior Parker. “Mr. Down Child” is interesting also from an historical point of view . . . it is not only the first song that he learned from Robert Johnson, but seems to be the only one in his step-father‘s repertoire that wasn’t recorded. Standing out among the band pieces are “Come Day, Go Day”, an engaging adaptation of an old Ray Charles song, and “Forever On My Mind”, is wistful, gently driving original. Among the instrumentals, I might mention “Annie’s Boogie”, dedicated to his wife (and a great cook), while “Majors, Minors, & Ninths” is the piece already alluded to as reminiscent of the bop era. It should be obvious now that Robert Jr. Lockwood is alive and well musically and in all ways, in Cleveland, Ohio, so give a listen to this.

Robert Jr. Lockwood is still out there performing and dealing with the albatross of his step-father. He’s come to terms somewhat with the Robert Johnson legacy these days, allowing the public’s interest to have some say in his performance repertoire and even doing some solo gigs. Still, his musical interest is much beyond the Johnsonian, more “advanced”, if you will, so that the past is not so much a point of celebration for him, but something to go beyond. It is the present and the future that are of interest to Lockwood.

Robert is a proud man, and with good reason. Even now an unsung figure in the stories of rock ‘n’ roll, blues, and rock music, Lockwood still does not have the success that his talent deserves. He is highly respected by his few peers and held in awe by the many that have followed. There is a second record for Trix [“Does 12” – Trix 3317], plus two for Rounder (shared with Johnny Shines), one for Black & Blue [Fr.] (now on Evidence in the U.S.), and a recent self-produced and self-distributed production. Less than a half-dozen full albums to date is not sufficient for such an important forward-looking and modern musician. Robert Lockwood in 1975 was an imposing and regal figure . . . he is no less of one today and listening to this record will give you a good idea why.

The fourteen pieces on this album were taken from three recording sessions done in 1973 – the solo sides being done at one at Roger Brown’s home in Hiram, OH (Jun 8); the band sides (Jun 13, Jun 18) at Lockwood’s home in Cleveland, OH.