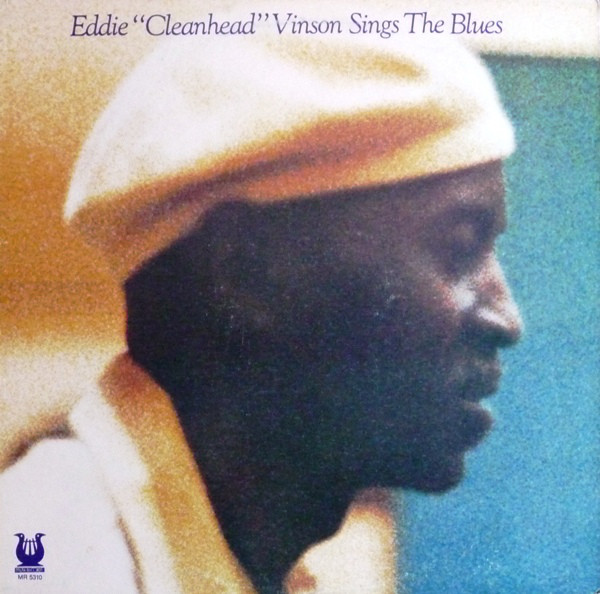 This is a lot different to my previous Vinson set… all vocals! Not quite a greatest hits package, it does cherry pick from three Vinson albums for Joe. I was at a standstill as to what to do, but it eventually worked, as I indicate in these notes, fake telephone call transcriptions!

Yeah, how are you? … Hey, I got a phone call last week from Joe Fields… Muse Records? He wants me to put together an album of Cleanhead Vinson vocals – take stuff from the four LPs that he‘s already issued. You know, the ones that were mainly blowing dates… there’re a couple of cuts on each album where he sings.

… I spoke to Johnny Meister, the guy with the blues show here in Philly, and he thought it was a great idea. Especially ’cause he likes Cleanhead’s singing – of course, it’ll make his job easier! Won’t have to go through a bunch of albums to find what he wants to play on the show! Actually, Joe thinks the idea of the album is good, that there are people who’d buy a record of Eddie singing, and this’ll make the stuff more accessible to them.

… I don’t know, though. It sounds sort of cannibalistic to me. I told Joe I’d give it a whack, and see what happens. Hey, I’ve got my pride… don’t want to be seen as another hack-for-hire with my name on something I can’t live with. Have to see if I can put together something good, not just another record.

… Yeah, I’ll keep you posted on how it goes… talk to you later.

… Well, I’ve listened through all the Cleanhead stuff that I was telling you about last time. There’s a total of twelve vocals spread over the four albums. Possibly some problems, though – only two cuts are up-tempo, and at least two others are just too damn long, too “blowing”

… just not appropriate for this sort of project. Won’t be easy.

… I will say that there’s good contrast between the three bands on those records and I can probably use that to good advantage. Hell, the hardest part to putting together a record is the most important part – programming. If the sequencing doesn’t flow, it just won’t make it – I’ve known many a record done in by bad programming. And a lot of them could have been good, too. Got to be careful here.

… So, anyhow, it’s probably time for me to go back and start serious juggling tracks. Choices have to be made and something’s gotta go. I’ll get back to you next week, when I’ve got a better handle on the whole thing… let you know then how this’ll work; nor it won’t.

… Hey man, I think I’ve done it, I think this project can be a real album! Well, Cleanhead has maintained a high level of quality, no matter what you may think of his little squeal. I’ve decided that it comes out of the same place as Peetie Wheatstraw’s “Ooo, well well.”

… So like I told you last time, there’re three bands taped at four sessions. First off is “The Clean Machine” tapes that Eddie put together out in L.A. (Muse MR 5116). You remember, I was out there and went to the session… Right, I took photos and wrote nice, historical notes for that one.

… The last session’s the one done more recently with Roomful of Blues (Muse MR 5282) in The Apple – that gives one session with a couple of horns and Lloyd Glenn, one with the two tenors (Tate, Cobb), and one with the five horns and a hot guitar! Should be enough variety there… I’ll check back with you next week and go over things when I’ve finally got the tracks set. Take care.

… So how’re things, my man? Hope I’m not calling too late! Good, good.

… Hey, you know, I think the Cleanhead project is going to work! Yeah, OK, I’ll run it down for you.

… First, things kick off with “Hold It Right There’ off the second Sandy’s set. It’s a real romper that has Cobb and Tate sandwiching a Cleanhead alto solo… good long cut with Eddie really singing up a storm. You know something, I looked up all the tunes and found out that this was first done in 1957 for Bethlehem Records. This is a good opener.

… Then comes “Past Sixty Blues”, a recent tune from the Roomful album. A nice slow blues that extols the prowess of seniors… good trombone backing the vocal, and nice guitar intro.

… OK, now comes a real old tune for Cleanhead, one he did with Cootie Williams band… Yeah, he did it first in 1942 for OKeh, but it never came out – same date Cootie cut “Epistrophy”. Anyhow, they it again for Capitol in 1945 – it came out this time –it’s called “When My Baby left me”. This version comes off the first LP and there’s some fine Lloyd Glenn piano; one of my favorites.

… So the first side ends with another recent tune from the Roomful session; good stop-time and back beat. You could say it’s about a recently deceased close friend. Ronnie Earl takes a tough T-Boney solo… it cooks.

… Now the second side starts cute with Arnett introducing Eddie who cuts loose with one of his mouldy oldies, “Cleanhead Blues”. This one goes back to 1946 and Mercury – anyway, it’s from the first Sandy’s set and has a tasty alto solo before the vocal – Cleanhead all the way. It bears repeating.

… This is followed by another tune of the same vintage, “Old Maid Boogie”…kind of an antecedent to “Past Sixty” or “Friend of Mine”, you know what I mean/Anyhow, it’s a good shuffle/boogie… hard not to be good with that band!

… The third cut is one from the Joe Turner songbook; you remember “Cherry Red”? Eddie does this a lot, and he first cut it in 1944 for Hit/Majestic with Cootie, and again in 1945 with his own band for Mercury. It’s another song that’s been in the Vinson repertoire a long time… this version’s from Sandy’s II.

… Finally, the record ends with “High Class Baby” from the first Sandy’s LP; this is one Cleanhead first cut for Mercury in 1947. There’s some great blowing here, besides Eddie’s vocal – Arnett and Eddie before, Buddy after. It’s long, but it’s a really great closer.

… So what do you think? How does that sound?

… I’ll send you a tape and you can tell me next week.

… Well, I’m glad you like how it sounds… I think it flows pretty nicely, too. I spoke to Joe Fields yesterday and he liked it, too. Nice to please the boss! No, he said he played the cassette in his car coming to work… hell, if it makes it in a car, then it’s OK, you know what I mean?

… Glad it’s done, man. It wasn’t as easy as I thought it’d be, but it turned out better than thought it might. Looks like I’ve pulled it off – thanks for listening… talk to you later.