He is different from many of his contemporaries because he is into musical evolution. He is entirely unlike many bluesmen who, for years, played the same songs In the same way. I first saw Robert gig at Faragher’s Back Room in Cleveland about five years ago. Since then I’ve seen him work every worthwhile club in that city, and every performance I’ve attended gave evidence of the man’s ceaseless artistic progress and versatility. If Lockwood’s 1970 (Delmark) album failed to properly illustrate this versatility, then his first Trix LP (Trix 3307) did not, and it was a good idea to name it “CONTRASTS”. On it, Robert demonstrated his country blues, uptown blues, and slide guitar blues.

This, his second Trix LP, contains yet another facet of his music in that most cuts feature his use of his 12-string guitar. Robert’s wife Annie gave him the 12-string (it’s a Guild] and he originally intended to put only six strings on it and use it for sliding. But he liked the 12-string sound and decided to incorporate it permanently into his act. He first gigged with it in a now-defunct Cleveland club called The Grapes of Wrath, a joint so small that he couldn’t use his whole band and usually appeared with Gene Schwartz, his bassist. (He jammed a lot there, with other Cleveland area musicians like pianist Jimmy Ley, guitarist Dave Griggs and, occasionally, this writer.) He began using the 12-string for whole sets at a time, often doing an instrumental first set before switching to his more familiar Gretsch Country Gentleman.

The 12-string lends itself well to the modem, jazz-oriented tunes that Robert likes to do, just as his background makes him the prime interpreter of Robert Johnson material. Anybody who is holding this album is probably aware of Robert’s relationship with Johnson and will find this version of Johnson’s “Terraplane Blues” to be a brilliant musical statement.

Something else that should be mentioned is that this LP contains new recordings of “Selfish Ways” and “Down Home Cookin’”. These were both sides of a single (BB 020) Robert did on Bobo Jenkins’ Detroit-based Big Star label, a single negated by poor sound. Both are nice and it’s good that superior versions of them are to be had on this album.

Robert has lived on Cleveland’s East Side since around 1960 and he is, frankly, one of that city’s few musical assets. His band has undergone countless personnel changes, but the group heard here . . . it’s the band he regularly plays with . . . may be the tightest he’s ever assembled. So, do whatever you do to get in the right frame of mind to listen to good blues, and listen to Robert Junior Lockwood . . . one of the most highly evolved and varied musicians in the idiom.

While most blues labels of the early 70s were recording artists from Texas/California or the Chicago/Delta scene, Trix Records focused on the bluesmen of the Southeastern states. The great blues boom of the 1960s was already tapering off, as were the sales of blues records in general. The infrequency of new blues recordings left the work of many superb artists unavailable. At the time I came to record Robert Jr. Lockwood for his two Trix albums, (this one and the earlier “Contrasts” – TRIX 3307), he had no LPs in commercial release, just a tiny discography of singles dating back to 1940. This was criminal, in my estimation, and I did what I could to rectify this scandalous vacancy in the blues catalog.

Robert Lockwood, Jr., the stepson of Robert Johnson, is considered by many to be the most important and under-rated guitarist in the blues and. by extension, in rock ‘n’ roll. He is a wonderful and, at times, difficult man – an exacting perfectionist and often a harsh mentor. Even though these albums were my best-sellers at the time of their initial release, Robert never understood why they didn’t sell even more. Neither Robert nor myself made any great sums of money from these recordings. But I slept easier knowing that I had my part in preserving the artistry and talent of one of the truly great men in the blues.

Now Trix is alive again, thanks to Joe Fields, and the best Robert Jr. Lockwood album ever is available once more. While it is difficult to pick a favorite child, I am tempted to say that this record, of all the ones I recorded, is the one which has afforded me the most pleasure over the years. This is one great record of the blues, at once both down-home and sophisticated. There are many other Trix releases I produced that rate an “A” grade…this is the only “A+”. This is a master at the peak of his creative power and musical abilities. Seriously good stuff!

Robert Lockwood was a regal being who knew how good he was and often did not suffer fools gladly. Fortunately, I wasn’t one of the fools, at least most of the time! I was privileged to be able to hang out with him at his nice three-story home in the Hough section of Cleveland, even staying there once or twice. We got along pretty well for quite a few years – I gather that his wife, Annie, may have persuaded him that I was getting rich off of his work and fled to Australia, for he was a bit abrupt when last seeing him and I heard reports… .

The last time I saw him was in the Lower Hudson River Valley at a solo concert at a regional college – before that, it was in NYC with his band. I took a few boxes of the albums to give him to sell at gigs, as I did for all “my” artists. Robert deserved whatever plaudits he might get, for he was both good, and seriously important in the history of the music. Points along those lines are touched upon in these above liner notes and those for 3307.

This LP was favorably reviewed in all publications (save, oddly, BLUES UNLIMITED – unfortunately, the same tin-eared reviewer covered both this album and “Contrasts” negatively for that journal), including TWO in the SAN FRANCISCO EXAMINER, one by their jazz critic (Ralph J. Gleason) and one by their pop music reviewer (whose name escapes me)! I have never tired of listening to this record, even after the sessions, the editing and mixing, the compiling – it’s a beauty.

The eleven pieces on this album were recorded over two days in 1975, at Nashville North Studios in Parma, OH and mixed at Earth Audio Techniques in North Ferrisburg, VT in 1977. 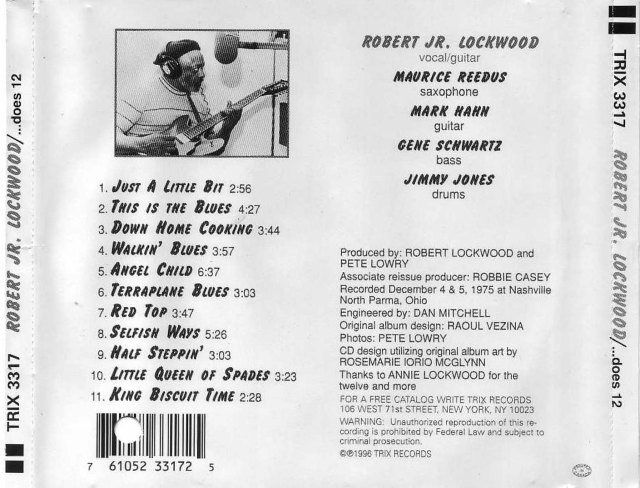